An Interview With George Spriggs

The Light Magazine of October 1895 carried an interview with Mr George Spriggs and was entitled "The Mysteries of Mediumship".   This article was carried over a number of issues.   Here you can find the full interview in PDF Format which was originally carried in our now defuncted magazine of the same name, The Voice Box.  Just press the link below:

The Mediumship of George Spriggs

George Spriggs (1850-1912) is rightly designated as a 'powerful English materialisation medium' by Fodor.1 The first records made of his mediumship began in the 1870s, being witnessed at 'the Circle of Light' in Cardiff.

George worked as a non-professional medium at the circle, this having been formed by Rees Lewis in 1875. The circle enjoyed spectacular results and may have possibly been linked to the arduous routine adopted by its members; this included a vegetarian diet, abstinence from alcohol and tobacco, and fasting on the day of the séance: a special room was also set aside for the seances. Possibly more relevant was that the circle was, according to Lewis, 'physically, intellectually and morally good';2 the members saw their activity more as a sacred service than an attempt to simply commune with 'the other side'.   Until George joined the circle, there had been limited to table- turning; however, when he participated, dramatic phenomena began. The first indications of his mediumship were the occurrences of automatic writing and clairvoyance; these were followed by the appearance of a luminous cloud in the séance room that signalled greater things would soon follow. And indeed they did, with full materializations joining the circle and speaking to the sitters; on occasions, as many as twelve materialized persons would appear during one seance: in this time, George was also visible. Furthermore, seances could be conducted when, 'the light at times streamed in, permeating every corner of the room, and falling on the form of the spirit'.3

Most people acquainted with this type of phenomena and communication are aware that a negative, or even a disbelieving nature reduces the degree of quality. While this in itself attracts criticism, the reality of the situation has been noted time and time again. Robertson noted that the Cardiff circle were disinterested in any scientific testing because: 'They had the evidence of their eyes, their ears, and their hands. The faces of those they had known, the voices they knew of old, were sufficient for them'.4

This does not mean everything has to be accepted at face value with blind faith: this attitude is, and has always been quite alien to authentic Spiritualism; but the fact remains that a positive stance does assist in quality communication, and having received this, it may then be evaluated accordingly. In the upshot, it can be seen that the right attitude secures the best results, and the Cardiff Circle was a very apt example of this.

It has often been observed that in most cases, materializations are confined to appearing within a certain distance of the medium. However, George's mediumship differed in this respect as those who materialized could function at some distance from him, e.g. walking about the property and even into the garden. Robertson recorded how the next-world visitors, 'would come out of the sitting-room into the hall and show themselves in good light. They would ascend a short flight of stairs, open the doors of the rooms, and enter them'.5

In one case, Lewis was accompanied by a materialization, holding his arm, as he walked downstairs, a distance of about fifty feet. In the midst of such activities, a direct voice could also sometimes be heard. One of the more amusing aspects of George's mediumship was that in the case of spirits going out into the garden, this upset the religious neighbours who saw and heard them, and threatened to call the police. An interesting feature of the materializations facilitated by George was that a form would change into another person without having to dematerialize, and the second visitor was spared having to go through the process of appearing from a basic form. The argument that the materialized forms were simply George undergoing transfiguration was shown to be incorrect as he could be seen when the figures joined the circle and then dematerialized in front of the sitters. A record was kept, detailing those who attended and what had occurred, and Lewis wrote about the events that were witnessed, e.g. in Light in 1886.

In 1880, George travelled to Melbourne, Australia; before he left, he asked Lewis to demonstrate his own survival after he died, and if possible, in a lighted environment. On arriving in Australia, George continued to produce the same type of phenomena that had been witnessed in Cardiff. An editor who attended fifty of George's séances testified that he recognized associates who had died. After many months of not hearing from Lewis, George was outside his home one afternoon in the bright Australian sunshine and felt his clothing being pulled; on turning around he recognized his friend, Rees Lewis: Lewis had died a week earlier. He had kept his promise.

Another instance that demonstrated George's remarkable mediumship was the case of three teenagers who had drowned while sailing. Hugh Junor Browne, the father of two of them, went to George seeking information after they had not returned home. George, not knowing anything about the circumstances, went into trance and told Browne there had been trouble at sea, and described the movements of the boat and advised that it had foundered.   During séances on the following two days, George was controlled by all three boys who confirmed what had been said earlier. Three weeks later, the remains of one of Browne's sons were recovered from the sea; amongst them was the boy's watch and this had stopped at the very time that George had said the ship had foundered. Fortunately, Browne was a Spiritualist, and the boys were acquainted with its teachings and testified to how their knowledge had assisted them in their transition. In fact, 'the lads made their materialised appearance once or twice a week, and the father and others recognized them distinctly, and were cheered by the messages they gave'.6

Meads, a prominent worker and speaker for Spiritualism in its early days, once attended a meeting arranged in honour of the American medium, Mrs Wallace, and was seated next to George during the events. While one of the speeches was being made, Meads became aware of 'faint rappings' on the platform. On commenting upon this to George, he calmly replied that he had not only heard them, but seen the next- world visitor responsible. Meads added that on meeting George, he had 'formed a very favourable impression of his sincerity and honesty'.8   George's abilities for materialization had faded by 1886, although he continued with his work of healing. Many testified to their recovery through his intervention. Meads also made mention of George's abilities in this respect saying that he doubted, 'if any medium had surpassed him in diagnosing disease'. Furthermore, 'he asked no questions, but carefully avoided the subject of health';9 in fact, George was quite ignorant of health matters, but having passed into a trance state, he would locate the area causing concern and prescribe a suitable cure.

After several visits to England, George returned in 1900 and resided in London; he was then involved in establishing the Psycho Therapeutic Society in 1901 that sought to heal, by psychic treatments, through a 'society where those who needed it could get free treatment'. Here, he continued to give his services, making no charge, for those who required them. Writing before George died in 1912, Robertson said that having met him, he had 'a generous, happy, cheerful, healthful nature', and 'if there are souls needing help, his powers are ever at their service'.10

NB. This article appeared in the Ark Review of February 1998 and reproduced here with their kind permission.

I have received the following document from the Great Granddaughter of Mr. Thomas Kerrison Bellis - born in Liverpool in 1841.   Mr. Bellis had a Trance examination and reading of George Spriggs before Mr Spriggs death in 1912.   He felt the write down his findings and they are published here, with some history of Mr Bellis, provided by his Great Granddaughter Gillian Lee (Bellis).

First the History, then the Original document  followed by a transcription as it is a bit difficult to interpret.

My great grandfather was Thomas Kerrison Bellis - born in 1841 in Liverpool, the son of a Master Mariner, after training as an accountant he later became a West India Merchant - his most famous trade being importing live turtles from the West Indies - The TK Bellis Turtle Company Ltd, a business we probably would not condone today - but very popular in the late 1800's early 1900s - as soups, potions and remedies, and was honored by Royal appointment to Queen Victoria.  He died in 1929 - where he resided in Maida Vale, London W2.

He as involved in many business ventures - one of which was the tobacco trade, and one working in conjunction with  Zonophone Records bringing musicians to England from the Gold Coast to record at their London recording studios - The Kumasi Trio being the most famous. 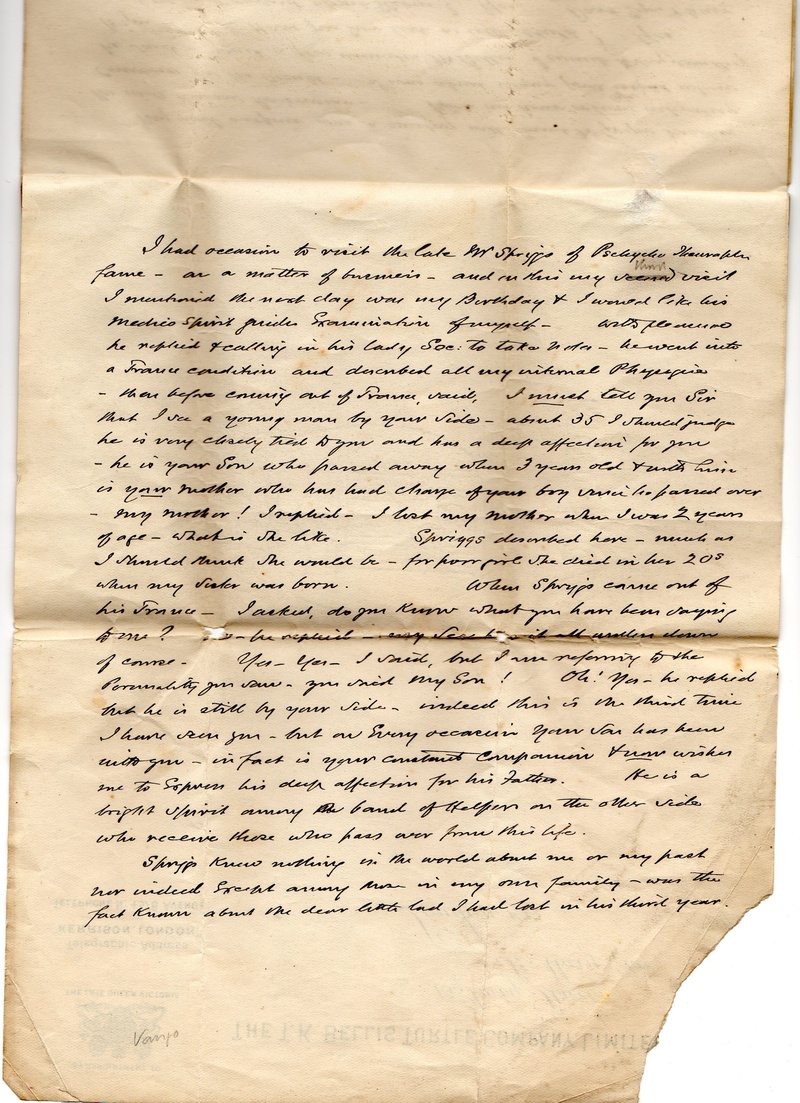 I had occasion to visit the late Mr Spriggs of Psycho   Therapeutic fame – on a matter of business – and on this, my second visit, I mentioned, the next day was my birthday and I would like his medic’s Spirit guides Examination of myself.

With pleasure he replied and calling in his lady Sec, to take notes – he went into a trance condition and described all my internal physique, then before coming out of trance, said, I must tell you sir that I see a young man by your side – about 35 I should judge, he is very clearly tied to you and has a deep affection for you – he is your son who passed away when 3 years old and with him is your mother who has had charge of him since he passed over.

My Mother! I replied – I lost my mother when I was 2 years of age – what is she like?   Spriggs describer her – much as I should think she would be – for poor girl died in her 20’s when my sister was born.

When Spriggs came out of his Trance – I asked, do you know what you have been saying to me?   No – he replied – my Sec, has it all written down of course.   Yes, Yes I said, but I am referring to the paramality you saw – you said my Son!   Oh! Yes, he replied, but he is still by your side – indeed this is the third time I have seen him – but on every occasion your son has been with you – in fact he is your constant companion       wishes me to express his deep affection for his Father – He is a bright Spirit among a band of helpers on the other side who receive those who pass over from this life.

Spriggs knew nothing in the world about me or my past.   Nor indeed except among those in my own family – was the fact known about the dear little lad I had lost in his third year.