I use the term mental mediumship because that is what Mediums who work with their mind do.   They work on either a Spiritual level or a Psychic level, but whatever way they work it is done through a process of mental attunement.   This attunement gives them the ability to link to either their spirit guides or to psychic vibrations that surround each and every living object on this world.

If you have read the pages on this site that deals with the different forms of mediumship, you will understand the process that mediums use to 'Tune In' so to speak.   This ability then lets them sense things or see pictures within their minds eye.   The psychic artist has an advantage over the mental medium, where he is able to draw a picture of what he sees or senses, as opposed to just explaining to the recipient of the message.

As with all forms of mental mediumship, the quality of the drawing and the message will depend on the attunement of the mediumship being practised.   It might be that you will get a very good message but can not recognise the picture, or visa-versa you recognise the picture but the message doesn't fit.   Again it is all a case of attunement.   The mental Medium only has to concentrate on the message being given, the psychic artist has the added responsibility of also trying to draw his picture at the same time.

It should also be pointed out, that there are some mental psychic artists, who can only draw a picture, they know who the picture is for (sometimes) but are unable to give a message with it.   In cases like this they might ask another mental medium to work with them and translate the picture, and give the message to the person who the picture is for.

One of the best known Psychic Artists of modern times, and working on a mental mediumship vibration, was undoubtedly Corol Polge.

Psychic Art in the Trance State

I believe that mediums who work in the trance state are of course on the first steps of Physical Mediumship.   Some very wonderful teaching have been passed from the spirit world through many mediums who have worked in the trance state.   The Teachings of Silver Birch, through the mediumship of Maurice Barbanell are just one perfect example.   Of course there are also the teachings of White Feather as seen on this site through the mediumship of Robert Goodwin, which comes from the White Brotherhood.

However, we are here to talk about Psychic Art.   There have, over the past 100 years or so been only a few well known psychic artists who have worked in the trance state.   David Duguid a Scotsman.   He would work with oils and very dirty oily hands and rags, with brushes that were caked in many colours.  The pictures produced were magnificent.   Many complained that there was no originality to his work and that they were always copies of another master piece.   What he was famous for is his production of miniature paintings, some no bigger than a sixpence with very fine detail within them.   They were produced in the dark, or candle light whilst the medium was in Trance and sometimes tied up and never hardly ever spoke.

The first portrait I ever had of one of my spirit guides, was drawn by a psychic artist in the trance state.   The picture on the  left, was drawn in 1979.   The artists name now has slipped my memory but the picture was signed by the guide drawing the picture and was called "Marchello".   He claims that he worked as an apprentice to De Vinci.

Again, I have to point out that even during the trance state, these pictures will only be as good as the spiritual connection of  the medium with his guide.

Physical Psychic Art, or Direct Drawing and Painting.   Nandor Fodor says:   Is a development of automatic drawing and painting in which the hand of the automist is not made use of, and some times, even drawing and painting materials are dispensed with.   The sketch, drawing or painting being precipitated in the dark or light, and in time which would usually be to short for normal execution.

Psychic art in relation to this, can however, be a little different.   The general programme of mediums being tied and gagged in a chair etc; can and did take place with artists such as David Duguid.   This is not an absolute necessity were psychic art is concerned.   Logic would tell that, the artist, (the medium) would need his hands free to paint or draw the picture.   Where physical mediumship is concerned, logic holds no ground.   David Duguid was still able to produce works of art while his arms were tied to the chair and in a darkened seance room.   As the dark holds no barriers to spirit, this part of the work is easily understandable.   Being tied in a chair has different implications.

I would like at this point to mention two extraordinary sisters, Misses Elizebeth and Mary Bangs, of Chicago, Illinois.   Known as the "Bang Sisters".   In 1894, these two sisters were not only blessed with the gift of direct writing, but that of painting as well.   These sisters were spectacular during a phase of precipitated spirit portraits.   What was, and still can only be described as brilliant, was that this work was carried out in broad daylight in front of many sitters, often under test conditions, and they never once touched the picture or moved from their seats at any time during the producion of the portrait, which I might add, was on full view for all to see during its formation.

When they first developed this phenomenon, a locked cabinet was needed and several sittings.   As time went on they became more and more proficient.   A full colour portrait could be produced in within an hour or so.

Many of these portraits were of relatives of the sitters who had passed into spirit, and those who had sat for these paintings were asked to bring a photograph of the departed family member.   This was not viewed by either of the sisters and kept in the pocket or purse of the sitter.

Many of these pictures would be seen to alter when they were taken home, dresses or blouses would change and in several cases the eyes would open and close.   In one picture of a spirit lady a string of pearls appeared on the spirit portrait a few days later.   It was discovered that the girl had always worn them when alive.

Whatever the process in relation to physical mediumship and psychic art are concerned, the end products can be absolutely phenominal to see. 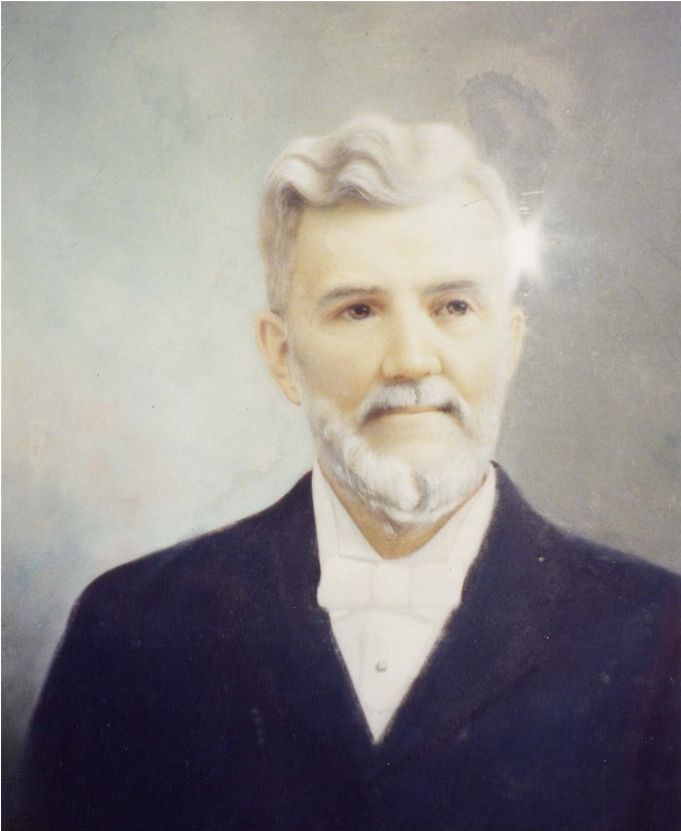 This portait by the Bang Sisters is of Alex Park McKee.     Mr McKee was the past treasurer of the  Indiana Association of Spiritualists.   This picture was completed in minutes and in daylight.

The portait has an actual sworn affidavit filed with the Legal Public Notary, and sworn by the witnesses on 21st August 1909 in Chesterfield, Indiana