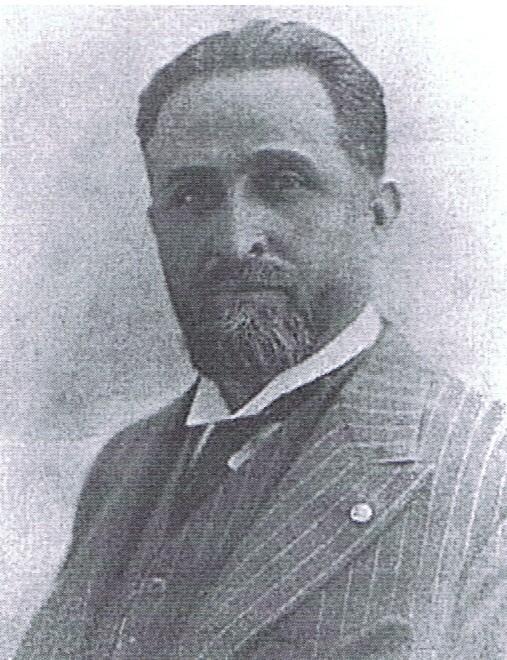 Carmine Mirabelli was born in Botucatu, San Paulo, Brazil on the 2nd January, 1889.   He was the first child of a protestant pastor, Luigi Mirabelli and his wife Christina.

He lost his mother at a very early age and it was this event that is believed to have helped his parapsychological sensitivity.   His father died on the 22nd February, 1914, after which Mirabelli followed with a complete financial breakdown, leaving him quite ill.   It was during this time that his extraordinary paranormal activity flourished.   He used to say that his father was his 'guiding star'.   Mirabelli was not a spiritualist, but he claimed he could see the spirits of his dead family which included, his parents, an uncle, his mother in law and his daughter.

In 1914 he worked in the local shoe factory "The Villica Footwear Company", when he was around, bizarre phenomenon (similar to poltigeist activity) would take place.   Shoes were seen to jump from the shelves by themselves, loud bangs without apparent reason.   Mirabelli did not understand what was happening, but many of the company's horrified clients attributed the phenomenon to the work of the devil.   It did not take long for the company to realise that the phenomenon occurred only in Mirabelli's presence, and as a result Mirabelli, was considered to be possessed which resulted in his being beaten up on the streets and his home stoned by religious fanatics.

Later he was interened in an Insane Asylum.   His doctors verified that he had a "Nervous Energy" that was above normal.   With the assistance of distinguished researchers of physical phenomena, Mirabelli became aware of the importance of his rare psychic gifts and decided to submit himself for experimental sittings.

It has been said that Carmine Mirabelli, could generate a considerable amount and variety of phenomenon never amtched by any other medium.   It was believed that much of his phenomenon was generated by his own psychic force, without the involvement of spiritual energies.

A committee of 20 leading men, including the President of Brazil, was set up to interview witnesses to decide what should be done scientifically, to investigate Mirabelli.   In 1927 it was decided to mount a series of controlled experiments in the newly established 'Arcadaiopus de Estudos Psychicos', using the same controls that European mediums had to submit to.    His mediumship was seen in action by many respected personalities.   During "The Experiments" all the doors and windows were locked and all persons present were assured of the best illumination possible to enable everyone to see the phenomonon in detail.

The investigators divided into three groups, one group dealing with spoken mediumship had 189 sittings that produced positive results.   A second group investigated automatic writing and had 85 positive sittings and 8 negative, (no results).   The third group investigated psychic phenomenon and had 63 posotive and 47 negative sittings.   Of the positive sittings, 40 were held in daylight and 23 in bright artificial light, (none in darkness) in rooms that were searched before and after each sitting.

Taking into account that Mirabelli,  had only a basic education and spoke only in his native language.   It is amazing to find that whilst in a trance state, spirit beings spoke through him in 26 different languages, which included; English, German, Dutch, French, Japanese, Czechoslovakian, Russian, Spanish, Polish, Turkish, Hebrew, Albanian, Latin, Chinese, modern and ancient Greek, sino Egyptian and several African and Italian dialects.  Also whilst in trance, high-level spirits delivered talks on subjects that would have been far beyond his basic educational standard, which included medicine, sociology, political economy, theology, psychology, history, natural science, philosophy, and the list goes on.

Again whilst in trance he was able to complete automatic writing in 28 different languages and at a speed that normal penship could not succeed.   Example:  in 15 minutes he wrote five pages in Polish on "The resurrection of Poland", in 40 minutes he wrote in Persion, 25 pages on "The instability of the Great Empires".

Mirabelli's mediumship did not stop there, at a well attended seance at San Vicente, the chair in which he sat on rose and floated in the air two metres from the floor.   Witnesses timesd the levitation at 120 seconds, (two minutes).   After another seance which was conducted one morning in full daylight, and in the labratory of the investigating committee, and in full view of many people to note, (including 10 men who held degrees in doctorates of science), the complete form of a little girl materialised by the side of the medium.  Dr Ganymede de Sauza was present and confirmed that the child was his daughter who had died a few months earlier, and that she was wearing the dress in which she was buried.

Another observer, Colonel Octavia Viana, took the spirit child in his arms, took her pulse and asked her several questions, all of which she answered with understanding of what was asked.   Photographs of the apparition with her father and other guests were also taken and attached to the investigating committee's report.   After this the child floated around the room and disapeared after having been visible in daylight for 36 minutes.   At another seance under controlled conditions, Mirabelli himself, dematerialised to be found later in another room.   Yet the seals on the doors and windows of the seance room were intact, as were the seals and bonds that held Mirabelli to his chair.

On one occasion, Mirabelli was stood on a railway station with a number of his companions waiting to board a train.   He was saying goodbye to one lady friend, when he started to dissapear in front of her eyes.   Startled she screemed, attracting the attention of others on the platform and of those boarding the train.   A great number of people turned in time to see Mirabelli disappear into thin air, leraving only what could be described as a whisp of what looked like smoke.   About 15 minutes later the station master received a telephone call from San Vincente, a town about 95 kilometres away, it was Mirabelli stating that he had appeared there exactly two minutes after he had disappeared from Da Luz, the station from which he was about to board the train.

Among those who gave their names as witnesses to Mirabelli's amazing feats, were the President of Brazil, The Secretary of State, two Professors of Medicine, 72 Doctors, 12 Engineers, 36 Lawyers, 89 men of public office, 25 Military men, 52 Bankers, 128 Merchants and 22 Dentists as well as members of religious orders.  The testimony of so many credible witnesses is hard to overlook.   Even so, he has been accused of fraudulent practices and some photographs showing his levitations, were seen to have been 'touched up'.

As he got older, Mirabelli didn't loose his strange gifts.   There are records on file with reports of phenomena being observed up to 1950, a few months before his death.

On Monday, April 30th, 1951, Carmine Mirabelli and his son Caesar had left their home.   Mirabelli was crossing the road to buy milk, leaving his son chatting to a shoe black on the side of the road, when suddenly a black Ford car, according to Caesar's recolections, turned the corner and ran over his father leaving him in a state of coma.   According to the death certificiate, Mirabelli had a skull fracture and died in hospital aged 62.   His body was entombed the next day, on the evening of May 1st, 1951 in the cemetery at San Paulo, Brazil.

Here is a further addition to the story of Mirabelli:

Probably this was the world's first case of materialization to be mentioned in a medical thesis. The "spirit" of Italian poet Giuseppe Parini (1729 - 1799), author of the satire Il giorno and editor of the Gazzeta di Milano, allegedly materialized during an experiment at the Cesar Lombroso Psychic Studies Academy, located at Coronel Seabra Street 18, in São Paulo (SP), on February 4, 1922, at 8 pm.

The poet was photographed between Mirabelli and physician Dr. Carlos Pereira de Castro, director of the academy. The thesis, by Dr. Brasílio Marcondes Machado, entitled Contribution to the Study of Psychiatry (Spiritism and Metapsychism) was presented on December 26, 1922 at Rio de Janeiro's Medical School, but was refused.

Parini's materialization lasted a few minutes. It happened in a well illuminated room with all doors and windows closed. The poet materialized in the room, declaimed poems in Italian and greeted those who were present shaking their hands. The process of dematerialization was followed carefully by all witnesses. The entity slowly dissolved in a subtle smoke.

Mirabelli became famous for his spirit materializations under intense illumination. Nothing was done in darkness, nor concealed by black curtains. The place was always carefully examined to prevent accusations of fraud. According to documents of the time (photos and records with signatures of those who were present), "spirits" would appear in front of numerous witnesses and were touched and examined by physicians for several minutes.

Among the many cases of alleged materialization is that of an entity who identified himself as the legendary Iranian Caliph Harun ar-Rashid (766 - 809). The phenomenon happened in the 20s, during a scientific-spiritualist experiment at the Cesar Lombroso Psychic Studies Academy, in Sao Paulo. Physicians Dr. Carlos Pereira de Castro and Dr. Olegario de Moura were among those who witnessed what seemed impossible.

Some observers (including the two mentioned above) were sitting in circle around a table when a loud blast was heard coming from above (the ceiling was over 3m high). Mirabelli was in a trance state. Suddenly a man with Arab looks appeared standing over the table. There was a general astonishment, once no-one could understand how the man could have entered the room, which was completely locked. The very solid apparition descended from the table and sat among the others (photo available). Dr. Olegario did a clinical examination which lasted for half an hour and verified that the "entity" was a normal human being. All in the room touched the figure.

The strange man, who spoke in Arabic, introduced himself as Harun ar-Rashid. The real shock was the unthinkable disappearing feat of the man. He returned to the table top, spoke a little more in Arabic, LEVITATED for 10 to 12 seconds and vanished in a flash.